Have you always wanted to be an engineer or did you have many dream jobs?

How long are your shifts?

Why do you want more girls in stem?

Has your satellite ever been hit by a rock? What would happen?

Can you try and post one of those images from space that you were talking about?

What does an engineer do?

How did you decide which type of engineering you wanted to do?

what is your go to quote / a quote that motivated you at your hardest times ?

What’s your opinion on global warming? Do you ever think engineers will be able to prevent it?

what gcse grades did you get?

If you was to look back on yourself now would you picture yourself as an engineer?

ASK the engineers any questions you have about engineering.

CHAT with the engineers in a 30 minute long text chat booked by your teacher.

VOTE for your favourite engineers to win a £500 prize to spend on communicating more engineering. 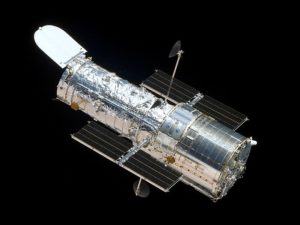 The Hubble Space Telescope, which has been in orbit for 27 years | Image: NASA

Look up at night and you will see a whole lot of space out there. With less than 70 years of sending things into space under our belts, the future up above is almost limitless.

In this zone, you’ll meet one engineer programming computers to discover new things from satellite images, one supporting people who use satellites in aircraft navigation and one working as an apprentice creating satellites that unfold once in space. Another engineer has founded his own engineering company making parts for rockets, another is an apprentice maintenance engineer working on space technologies and another builds engines for spacecraft that travel into deep space.